Ruairi Quinn has stated that Educate Together’s ambition to be patrons to a second-level school will be realised next month.

Ruairi Quinn has stated that Educate Together’s ambition to be patrons to a second-level school will be realised next month. Speaking at the multi-denominational patron body’s Annual General Meeting, the Minister praised the organisation for its contribution to Irish education as a agent for change and innovation. 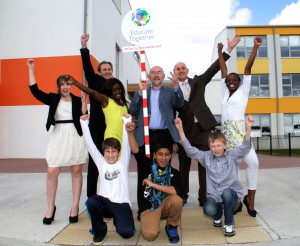 Second-Level patronage is a key issue for the multi-denominational patron body. It received recognition as a second-level patron at its AGM last year following a ten-year campaign. It is a strong advocate for educational reform and its ‘Blueprint for Second-Level Education‘ has been widely regarded as a best practice model.

The last year has been a very positive one for Educate Together with two new schools opened in 2011 and a further five opening this September. Significant investment in school infrastructure has been achieved and nearly all Educate Together schools should be in permanent buildings by 2015.

The Minister is due to receive recommendations from the expert group on patronage for second-level schools scheduled to be opened in the next three years. Educate Together has applied to open second-level schools in Drogheda, Greystones, Tyrellstown/Mulhuddart, Blanchardstown and Lusk.

Educate Together Chief Executive Paul Rowe welcomed the Minister’s statement and congratulated him on the initiatives he has brought to education reform since taking office. In particular he cited the establishment of the Forum on Patronage and Pluralism and stated:

“The Forum’s report has made a clear proposal for a mechanisms for change. However, responsibility has now passed to the State to implement this mechanism. The Forum report refers to the urgency associated with these steps. We believe that the establishment of a register of preference of parents of pre-school children should be the first priority”.

In our emerging modern democracy, it is unconscionable that the State is still compelling significant numbers of parents to send their children to religious schools against their lawful preference and conscience.

He expanded upon the issue of investment in education calling for protection of front line services and the urgent need to address waste and duplication of back office services in the state education sector:

Investment in our education system must protect front line services. This generation of children didn’t take out or offer the crazy loans that are at the root of our current problems. They are the key to our economic future and their educational chances should not be compromised by the profligacy of the past.

The last year has been a very positive one for Educate Together with two new schools opened in 2011 and a further five opening this September. Significant investment in school infrastructure has been achieved and nearly all Educate Together schools should be in permanent buildings by 2015.

Parental involvement and the principle of democratic engagement are cornerstones of Educate Together’s educational approach. The high attendance of its members and vibrant debate over conference motions illustrate an organisation with substantial support.

The importance of that support to Educate Together was acknowledged by Paul Rowe who stated:

“The role parents have played in the growth of Educate Together cannot be over stated. Their dedication to voluntary service helps to make our schools the rich and vibrant learning environments that they are. The Irish primary education system could not operate without parental involvement and our state owes them a huge debt of gratitude”.