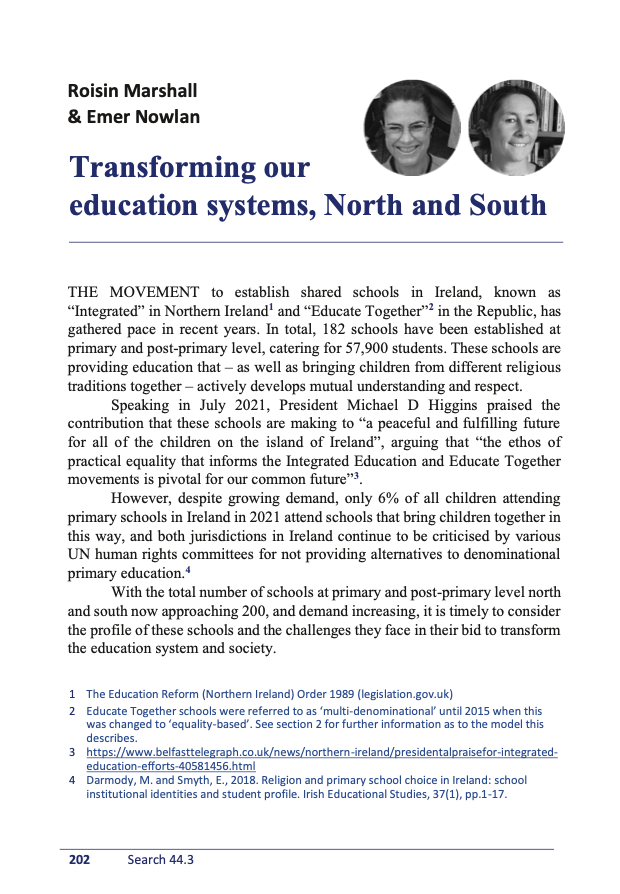 The Northern Ireland Council for Integrated Education and Educate Together are today calling for increased efforts to accelerate the pace of change across the island to ensure that all families can access schools where children are educated together.

In an article published in the Church of Ireland journal, SEARCH last month, the two organisations document the development of Integrated Education and Educate Together schools north and south which have led to 182 schools across the island at primary and post-primary level, catering for 57,900 students.

The article outlines 45 years of grass-roots movements for change north and south and the steady growth in demand for the Educate Together and Integrated models of education. The two organisations also identify some barriers currently limiting expansion, and call on governments, churches and wider civil society to make greater efforts to promote and facilitate change.

The original article was published in the Church of Ireland journal, SEARCH and a copy is also available to download here and on www.nicie.org.

Successive research and polling data points to significant desire for change in the profile of educational provision across the island, and there is strong parental support for integrated schools in Northern Ireland and equality-based education in the Republic.

In both jurisdictions, increasing numbers of families are attracted to schools that provide education that – as well as bringing children from different religious traditions together – actively encourage different identities to be reflected in the governance and staffing of the schools. Although there are differences in the two models, both school types actively foster inclusion, respect and equality for all communities and cultures.

While education policy in both jurisdictions places emphasis on ‘parental preference’, in fact choice is severely limited in many areas where families still do not have access to an integrated / equality-based school options.

It is now widely accepted that the profile of Ireland’s education system is out of step with demand and demographics, with only 6% of all children attending primary schools across the island in 2021 enrolled in integrated or equality-based schools. Both jurisdictions continue to be criticised by various UN human rights committees for not providing alternatives to denominational education.

There are still large parts of Ireland where the only choice available to families is to send their children to schools that are predominantly Catholic or predominantly Protestant. While some families have access to alternatives to denominational schools, there are currently not enough school places in integrated and equality-based schools, especially in areas of highest demand.

The Department of Education in the Republic announces the need for new schools and invites applications from prospective school patrons. Should those parents in areas where populations are declining also have school choice?

The challenge for both organisations is to engage in a constructive way with church authorities to both encourage and facilitate changeovers from denominational to non-denominational schools over time in the Republic and Transformation to Integrated Education of either Denominational or Non Denominational schools in the North. Closely aligned to this is the need to engage with public representatives, who in both jurisdictions have expressed support for change to varying degrees, but who have yet to make significant efforts to facilitate change.

Both the NICIE and the Educate Together models of school choice could be scaled up and planned for – where there is political will and leadership. Educate Together and NICIE support the rights of families to choose and access the education they want for their children. Yet it will take more than just the will of parents and school communities to make change happen on the ground on the scale that is required to meet demand.

The two organisations are therefore calling on governments, churches and wider civil society to make greater efforts to meaningfully engage with the issue of school choice in Ireland and to promote and facilitate change with a greater sense of urgency.

Educate Together has been offering parents a choice in Irish education since 1978, when its first school, the Dalkey School Project opened. Further information about Educate Together’s equality-based schools can be found on www.educatetogether.ie.