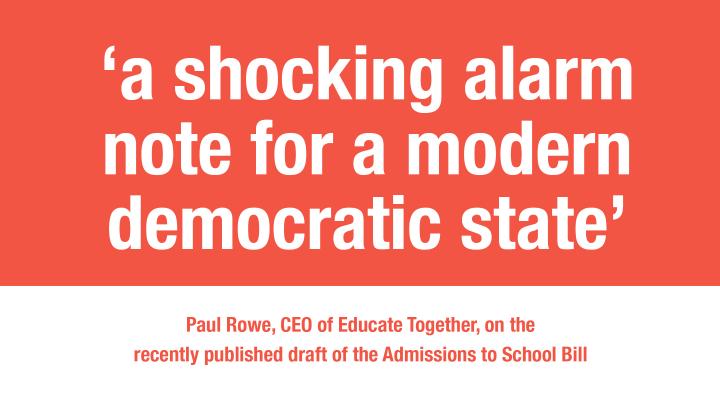 Educate Together welcomes the publication of the Admissions to School Bill 2015. The draft Bill represents a step forward for Irish education in clarifying the enrolment process for families, schools and patron bodies around Ireland.

Educate Together is acutely aware of the practical difficulties involved in devising and operating fair and transparent enrolment policies, and applauds Minister O’Sullivan for her work in this regard. Educate Together has long advocated for an open and transparent legislative enrolment framework, and looks forward to engaging with the Minister and the Department of Education and Skills as the Bill progresses through Leinster House.

On initial reading of the Bill, Educate Together is very concerned that it does not address the issue of religious discrimination in access to schools, nor do there seem to be plans to remove Section 7 3 (c) of the Equal Status Act in the lifetime of this government.

Educate Together CEO Paul Rowe: “The fact that an increasing number of Irish parents consider that it is necessary to get their children baptised in the Catholic faith in order to access publicly funded schools, rather than out of personal religious conviction, is a shocking alarm note for a modern democratic state.”

In her comments on the publication of the Bill, Minister O’Sullivan stated that the legislation had to be drafted “in the context of the Constitution and equality legislation… We can’t within that take away the provision whereby schools can protect their own ethos.”

Educate Together has always contended that state-funded schools should not be allowed to discriminate on the basis of religion. Children of all religious, cultural and social backgrounds should be able to access all state-funded education on an equal basis. Educate Together is not aware of any situation in which such discrimination is necessary in order to maintain the ethos of a school.

If it is the case that the Government is constitutionally barred from eliminating discrimination in access to denominational schools, then the state must act to provide an alternative to the overwhelming monopoly of Catholic schools (93% of the entire primary school system) in Ireland.

Educate Together CEO Paul Rowe stated: “There are still large areas of the country where parents have no alternative but to send their children to denominational schools, and the proposed legislation does nothing to address this.”

Paul Rowe continued: “Genuine choice of school type that is compatible with the constitutional and human rights of all families can only be achieved if equality-based schools such as those provided under the Educate Together model are available all over Ireland.” 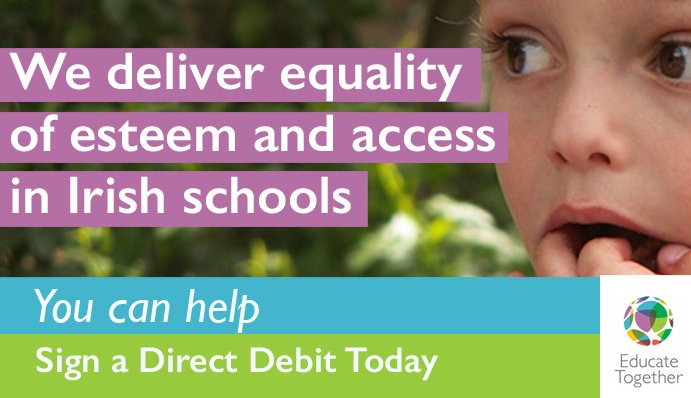