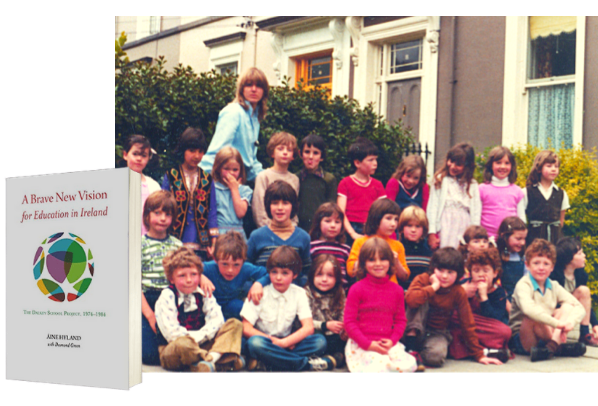 Educate Together has this week launched Professor Áine Hyland’s new book, ‘A Brave New Vision for Education in Ireland: The Dalkey School Project 1974-1984’, which documents the founding of Ireland’s first equality-based school.

Áine is a founding member of the Dalkey School Project as well as a renowned educational historian. Her book gives a wonderful insight into how the school came to open its doors, and how the equality-based school movement in Ireland came into being.

The book was officially launched on Tuesday 27 April 2021 and a recording of the virtual launch can be seen here.

The book was officially launched by journalist Emma O’Kelly. The online event featured a contribution from DSP co-founder Desmond Green,  a letter of congratulations from President Higgins, a range of contributions from members of the DSP school community and a collection of archive footage from the 1970s and 1980s.

The title of the book, A Brave New Vision for Education in Ireland, is taken from the keynote address delivered by the President of Ireland, Michael D. Higgins, at the annual general meeting of Educate Together in 2016. In his address, he referred to “the courage, commitment and pioneering nature” of the founders of the Dalkey School Project and stated that the Educate Together movement has been a critical and committed agent of change in the Irish education system.

A remarkable time in Irish education:

The book tells the story of a small group of parents who strove to set up a school where children could be educated together and where no one was considered an outsider. It describes in detail the families involved and the experiences of the first children to attend a multi-denominational primary school in Ireland and documents what the campaign achieved in a decade. It also provides the reader a glimpse into the immense social and political challenges and opposition facing the campaign for Ireland’s first equality-based school and ultimately tells a remarkable story of a remarkable time in Irish education.

Read a letter of congratulations from President Higgins, which the President wrote for the launch of the book.

The book is available online in paperback and Kindle format here.

You can watch a recording of the virtual launch here.