Claire Branagan of Rathfarnham Educate Together National School in Dublin writes about the school's Walking Bus initiative – a fun, sociable way to start the day, a chance to stretch the legs and get some fresh air as well as alleviating traffic congestion! Why not start your own Walking Bus in your school?

"On November 14th RETNS had its first ever Walking Bus Day.  There were 5 different meeting points within a kilometre of the school at which parents and children could gather.  Parent volunteers acted as “drivers” from each of the meeting points to the school.  100 of the school children (nearly half the school!) participated on the day, which meant that there were at least 160 people walking together, allowing for parents and younger siblings, when the 5 bus routes met for the final leg of the walk to school.  This was in spite of the torrential rain the night before and the resulting flooding all around the local area!  The principal, teachers and members of the Green Schools Committee greeted the bus at the school gates with balloons and banners.  All in all, it was quite a sight and a great experience for all concerned. 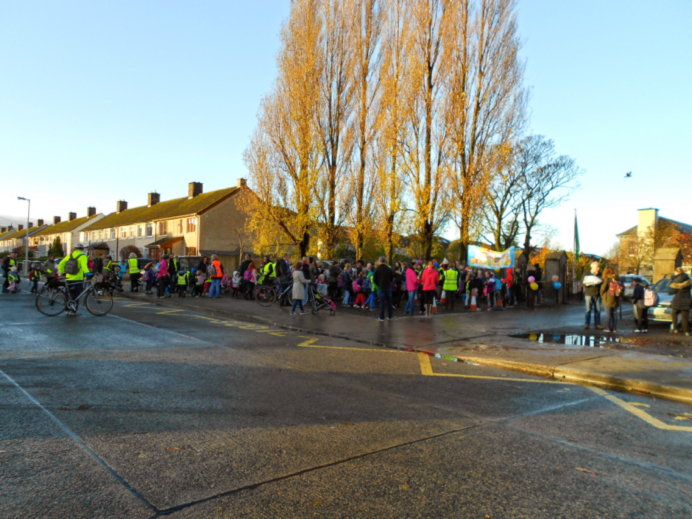 We had such a fantastic response to the Walking Bus Day that we decided to set up a weekly scheme, which has been running successfully ever since.  The scheme is informal in that parents take responsibility for their own children and there is no commitment to attend (except for the drivers).  If it suits on the day you show up at one of the meeting points with your children and the bus departs at the departure time with whoever’s on board!

There is a bus “driver” at each meeting point, who decides when to get moving and leads the bus.  Other parents spread themselves evenly along the bus with one parent going at the back.  We have been hugely fortunate to have so many parents willing to drive which means that any parent only has to drive once every 6-8 weeks.

We have tried to come up with fun ways to keep the momentum going and to encourage even more of the school community to participate.  For the last walking bus of 2014 we donned our most festive accessories and all participating children got candy canes to hang on their Christmas tree.  We recently re-introduced the Golden Boot Trophy, which is awarded to the class with the highest participation each week (It was previously used when the school was working towards the Transport Flag).  We also launched the RETNS Walking Bus Reward Card.  When a child has participated four times they get to pick something from the goodies box that DLR have kindly sent us to support our walking bus.  And just last week, we added a new meeting point so that now we have a walking bus on all the routes to the school.

Parents and children alike have found the walking bus to be a fun, sociable way to start Fridays as well as being a chance to stretch the legs and get a bit of fresh air before knuckling down to the business of the day.  It has had the added benefit of alleviating traffic congestion and parking woes around the school on Fridays.

Huge thanks are due to all the children and their parents for their commitment to the scheme and to our principal, Mary Carron, for her continual endorsement of the scheme in school and her unwavering support at the school gates every week, along with members of the Green Schools Committee and this fabulous banner made by 3rd Class: 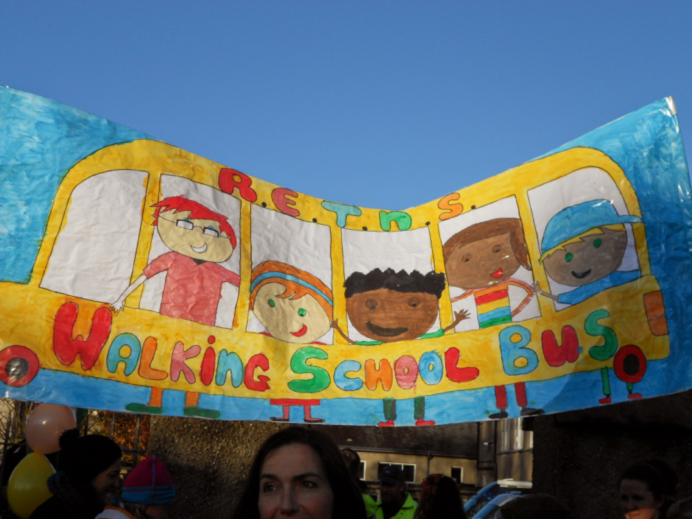 If you’d like to hear more about our walking bus, please email walkingbus@retns.ie