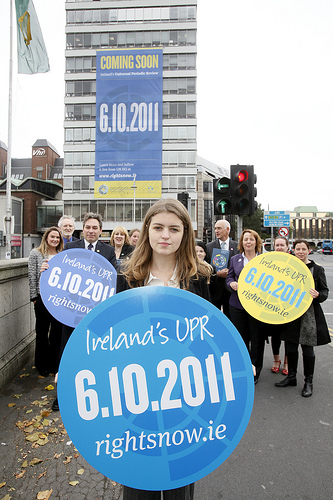 Educate Together has welcomed the publication of the UN Universal Periodic Review (UPR) of Ireland. In its UPR response Ireland has committed to “Accelerate its efforts to establish a national network of schools that guarantee equality of access to children regardless of religious, social or cultural beliefs’.

Educate Together has been working for over 30 years to establish a truly national network of multi-denominational schools in Ireland. Its legal charter obliges it to operate schools that provide equality of access and esteem to children "irrespective of social, cultural or religious background." The parallel with the UN recommendation is striking.

Paul Rowe is encouraged by the commitment made ‘Everyone involved in Irish education acknowledges that the current availability of multi-denominational schools of the Educate Together model is far below where it should be. However progress on addressing this lack of diversity has been agonizingly slow. Ireland has now committed itself to accelerating the process. Many parents in Ireland who have been waiting for years to access multi-denominational education, will hold the state to this commitment – and now the world is watching".

Ireland’s UPR report recommends a series of steps the state must take in relation to its improving human rights record and associated legislation. In the education sector, recommendations were made on access on an equal footing for people with disabilities, the Traveller community and people from minority religions. Particular reference was made to eradicating discriminatory practice in Irish law citing education legislation as an example. Ireland has also, in its report response, given a commitment to ratify the UNESCO Convention Against Discrimination in Education.

Other significant commitments made include the continued implementation of the CERD (Committee on the Elimination of Racial Discrimination) recommendations. Ireland has made little progress on implementing these over the last 10 years.

On Thursday 6th October 201,  Ireland was examined for the first time by the United Nations on our human rights record under the Universal Periodic Review or UPR.

Educate Together has submitted a report to the United Nations Human Rights Council in relation to Ireland's UPR. That submission can be read here.

Educate Together also contributed to the Your Rights, Right Now Irish Civil Society report, which can be read here.