2018 sees the 40th anniversary of the opening of what would become the first Educate Together primary school in Ireland. In 1978, Dalkey School Project opened in a residential house. However, this pioneering new school would go on to be the first of a true alternative to the monopoly of religious-run schools in Ireland.

Dalkey School Project NS was the culmination of the hard work of a number of concerned parents that wanted inclusive schools that embraced difference and celebrated principles of tolerance and mutual respect, where children of all social, cultural and religious backgrounds were equally respected.

Since then the Educate Together network has flourished – there are now 84 primary and 13 second-level schools around the country, and demand for Educate Together’s unique model of equality-based education continues to grow. That’s why the organisation is now announcing its intention to apply for a further 13 primary schools to open in 2019 serving communities in Cork, Dublin, Kildare and Meath.

At Educate Together, we believe that the best way to mark the past is to look to the future so today a celebratory event was held in the Dalkey School Project to celebrate the movement’s 40 years in existence and the launch of our #VoteEducateTogether 2019 new schools campaign. The celebratory event was attended by some of the pioneers that founded the Dalkey School Project, Áine Hyland, Michael Johnson and Pat Johnston.

‘It’s a happy coincidence that the #VoteEducateTogether campaign is opening the same year that Educate Together celebrates its 40th birthday. It’s a fitting way to celebrate the legacy of those educational pioneers such as Aine and Bill Hyland, Michael Johnston and Florrie Armstrong that took that leap of faith with the founding of the Dalkey School Project in 1978. Back then, nobody could have predicted that by 2018 the Educate Together network would embrace 28,000 children, over 1,600 teachers and would have influenced educational policy in such a positive way. It’s a tribute to them and to the courage and dedication of the nascent Educate Together school communities in the intervening years that we are now in a position to apply for 13 new schools to open in 2019.’

In April 2018 Minister for Education and Skills Richard Bruton announced that 42 new primary and secondary schools would open by 2022. This is great news for families across Ireland that want to send their children to an Educate Together school. This month the Department of Education will launch an online survey (Online Patronage Process System) asking parents to choose their preferred school patron.This will help them decide the patronage of the 13 new schools opening in 2019.

‘DSP was founded by people with different beliefs, opinions and personalities yet dedicated to working as a team to establish inclusive education for children. ‘No child an outsider’ was a basic tenet. Listening to the children and the start-up groups today, it is evident the baton of equality in education is being passed on to a new generation. I am confident Educate Together is in safe hands. ‘

Says Orla Matthews, parent and volunteer with the Leixlip Educate Together Campaign:

‘I am a passionate supporter of Educate Together and am committed to working towards opening an Educate Together national school in my community for my child. It is a shame that families continue to have to lobby for schools where they don’t have to produce a baptismal certificate on enrolment and where their children will be treated equally during the school day. It is vital that parents in the 13 areas where Educate Together is applying for patronage go to the Department website to vote Educate Together. This is the opportunity of a lifetime.’

Interested parents should check out the campaign page here. 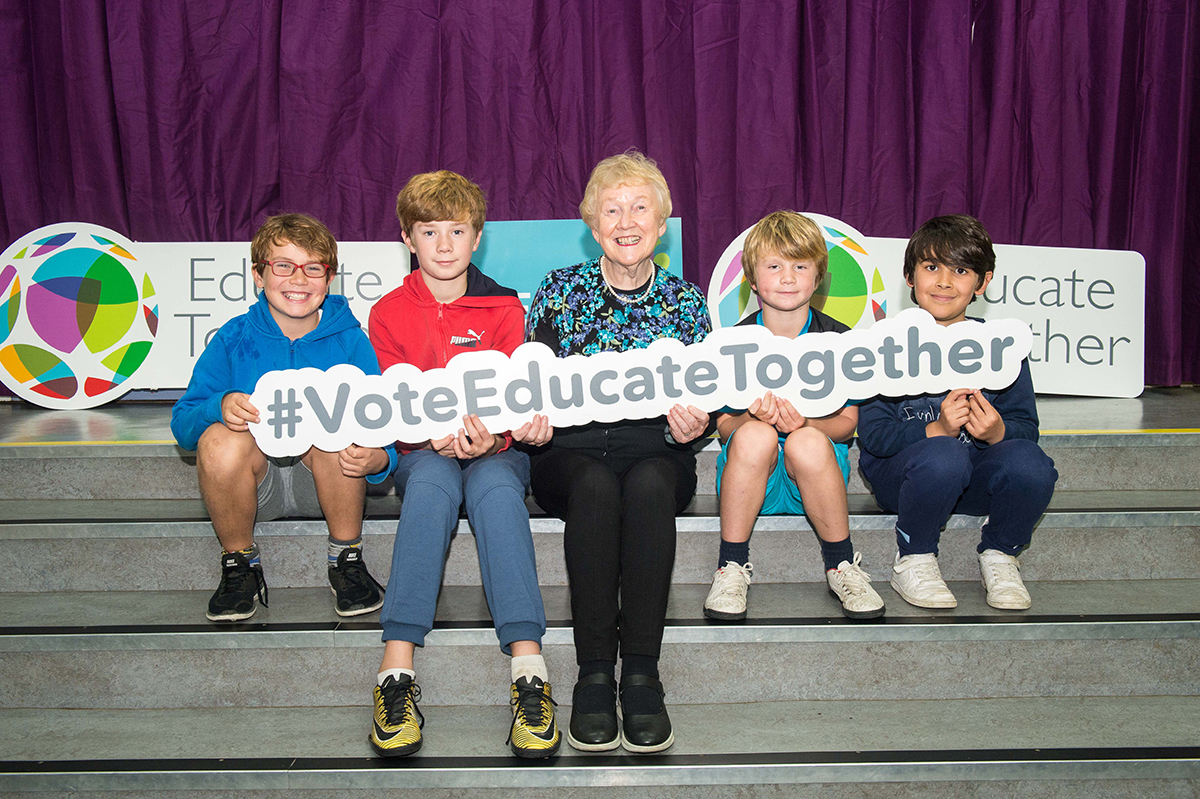