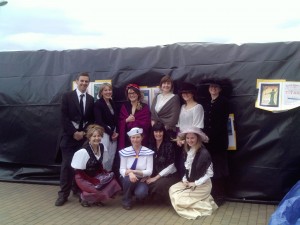 The front of the school had been prepared in advance with a gangway and special entrance.  Captain Smith was
waiting at the entrance!  Upon embarking through the school door, all “Passengers” were given a White Star Line boarding pass, which was then deposited in a container for lots of raffles during the school day!!

Three older classes entertained the parents outdoors with songs like “Trasna Na dTonnta” and “Alexander’s Ragtime Band”!  A marquee was also erected outside the front of the school to display the children’s artifacts, models that they had made, and Toys of the Era that they had made.  Parents also sold healthy cakes & pies.  All classes visited this special museum and all parents were impressed, also, by the displays in the front hallways of the school.

The children had been preparing for this day for about five weeks and they learned and absorbed a lot of history of the period.  Junior classes carried out experiments with water and ice.  It was a very worthwhile project, without forgetting to make reference to the sad family stories from the disaster.  Many lovely photos were taken on the day, some of which can be seen in the local papers.