Educate Together wishes to issue a clarification in relation to its model of education because of some recent queries we have received.

Under the organisation’s legal charter, Educate Together must support the establishment of schools which follow four key principles. The first of these principles is that all children have equal rights of access, and children of all social, cultural and religious backgrounds are equally respected.

The word ‘multi-denominational’ has been used to describe this principle since our legal articles were first drafted in the 1970s. However, many have argued since that this term is inappropriate. Under a process to review the language used in the Educate Together Charter, which was initiated at the organisation’s AGM in 2013, the term ‘multi-denominational’ is currently being reviewed.

Whatever language is used to describe the Educate Together model of education, the values underpinning the management structure and curriculum of Educate Together schools are those of human rights, equality and democracy. The rights of children and teachers from religious, atheist, humanist and other backgrounds are equally respected and no one worldview is taught as truth.

While the first Educate Together schools were initially required by the Department of Education to attempt to provide religious instruction for all children, it quickly became clear to these school communities that it was impossible to do this in practice while respecting the rights of every child in the school equally.

The obligation to provide religious instruction was removed, and this paved the way for the development of a comprehensive Ethical Education curriculum, Learn Together, which is taught in Educate Together schools today.

This curriculum helps all children, whatever their family’s beliefs or philosophical stance, to develop a critical awareness and understanding of ethical decision-making, and to learn about religious and other belief systems. Learn Together focuses on questions of equality, justice, sustainability and active citizenship. It helps learners to develop morally and spiritually, and to think critically, and empowers them to make a difference.

The Learn Together curriculum is fully in keeping with the Toledo Guiding Principles on Teaching about Religions and Beliefs in Public Schools – the globally agreed standards developed by the Office for Democratic Institutions and Human Rights of the OSCE. More information about the Learn Together Ethical Education curriculum is available here.

Following a motion passed at the 2012 AGM, Educate Together schools are formally prohibited from allowing denominational instruction of any kind to take place during the school day. Although in many schools parents come together voluntarily to organise religious instruction classes for their children as an extra-curricular activity, such classes are separate from the curriculum and are not organised by the management of the school.

Educate Together has been advocating on behalf of parents seeking an alternative to denominational education in Ireland since the 1970s.

The organisation’s legal Charter recalls Article 26.3 of the Universal Declaration of Human Rights:

Article 2 of the Educate Together Charter affirms this right, stating:

“Parents are entitled to participate actively in decisions that affect the education of their children. In particular, they have the right to decide what kind of school reflects their conscience and lawful preference”

As such Educate Together fully supports and promotes the engagement of members of Educate Together school communities in the democratic processes of the organisation, and their participation in decision-making and policy development.

Furthermore it supports the rights of any group or individuals to establish alternative schools which reflect their values and preferences.

As well as pressuring locally for change, Educate Together has been advocating for the rights of families through various international channels for many years. The first reference by any UN body to the predominance of Catholic schools in Ireland came about as the direct result of representations made by Educate Together to the United Nations Convention on the Elimination of Racial Discrimination in 2005:

The Committee, recognising the "intersectionality" of racial and religious discrimination, encourages the State party to promote the establishment of non- denominational or multi-denominational schools (Article 18, UNCERD 2005)

Educate Together has continued to raise the issues relating to human rights deficits in Irish education with the UN under different conventions and periodic reviews, in order to increase the pressure on the Irish state to meet its obligations. As a result, UN committees under the following treaties have made recommendations in support of Educate Together’s submissions: The UN Convention on the Rights of the Child, the International Convention on Civic and Political Rights, Universal Periodic Review. The Council of Europe has also made similar recommendations under the Framework Convention on National Minorities. A summary of the recommendations can be read here.

For recent comment on addressing the human rights deficit in Irish education, read this blog from Educate Together’s CEO. 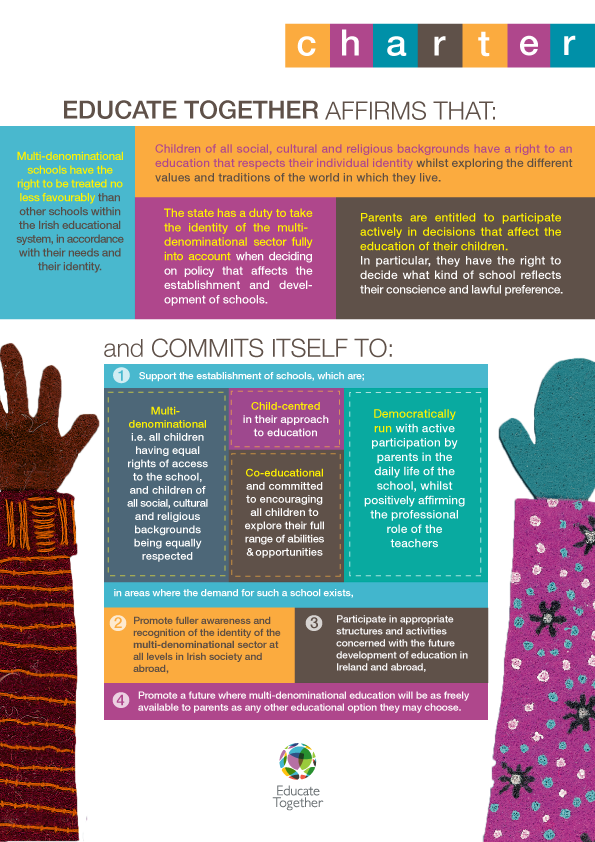