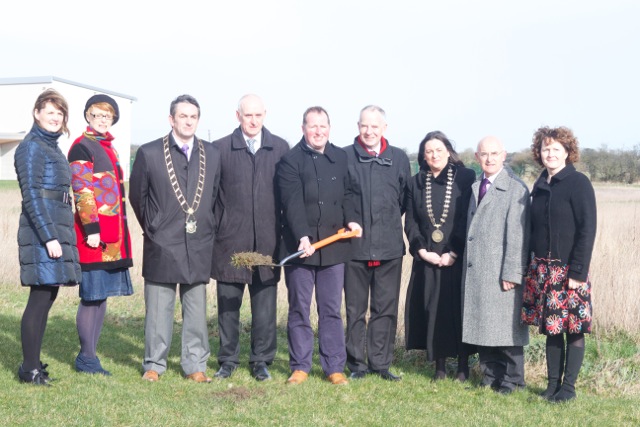 The sun came out on Thursday 13th February 2014 as Principal of Ballymakenny College, Alan Mynes, turned the first sod on the site of the new second-level school on the Ballymakenny Road,Drogheda.

The construction contract has been awarded to O’Hare McGovern, which is the construction division of Newry based Carnbane House Group. Work on the site officially commenced on Monday 17th of February and construction is expected to take a year and a half. In the interim, the school will open this September on the first floor of Aston Village Educate Together National School.

Ballymakenny College will be a state of the art building with flexible learning spaces, bright, well-equipped specialist classrooms and labs, sports areas, social spaces for students, and areas for extra curricular activities. Ballymakenny College will also be fully WiFi enabled, allowing information and Communications Technology to be integrated into the learning environment.

Principal Alan Mynes said “It’s wonderful that today we have taken the first step towards building our new school, which will eventually accommodate 1,000 eager young people. The leading-edge design of the building will allow students to engage in an integrated and project-based approach to teaching and learning where they can ask questions, investigate and draw conclusions as they develop important skills such as leadership and problem solving”.