On Friday September 5th, Redfield Educate Together Primary Academy, located in Redfield, Bristol, will welcome its first cohort of pupils. This Academy is the first Educate Together school to open in England.

Redfield Educate Together is a fully State-funded primary school. The school’s development, on-going costs and accommodation is provided by Bristol City Council and the the Department for Education in England.

The Academy is located in temporary accommodation off Leonards Road, Redfield, Bristol. This week it welcomes 57 children, their parents and carers and 7 staff. During its first year of operation, the children will watch as a new state-of-the-art building is constructed next door on Avonvale Road. This new building will be ready next September and the school will then grow year by year to accommodate 420 children.

The Department for Education in London announced in December 2013 that Educate Together will run the Bristol school. Educate Together is the fastest growing model of education in Ireland and is regarded internationally as an example of good practice in inter-cultural education. In the UK, all new schools are required to have an independent ‘sponsor’. In 2013, UK-based educationalists asked Educate Together to consider becoming such a body. As a result, the Educate Together Academy Trust was established.

”It is wonderful to welcome children to this new school. Parents and the local community have campaigned so tirelessly to get the school built. We look forward to continuing to work closely in partnership with both families and the local community for many years to come. I am particularly grateful to all those schools leaders who have shown me so much support in opening this school."

A quote from a director of the Educate Together Academy Trust, Bristol resident Clare McKeown:

"The opening of the new Redfield Educate Together Primary School this week is so exciting. It seems particularly appropriate that Educate Together, pioneers of an educational model developed to offer equality of access in a diverse and globalised world, should be opening its first UK school in Bristol, such a diverse and increasingly globalised city. I feel sure that residents, both in Redfield and further afield around Bristol, will welcome their arrival.“

Paul Rowe, the CEO of Educate Together:

“This is a very exciting development for Educate Together. For many years, educationalists in other countries have expressed interest in the potential of the Educate Together model and ethical curriculum for education in areas of great population diversity. We are delighted to have the opportunity to provide this for the first time in England in such an interesting and dynamic city as Bristol. The support we have received from the local parents, local authority and the British government has been outstanding.” 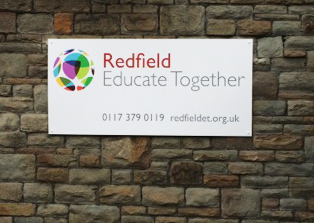